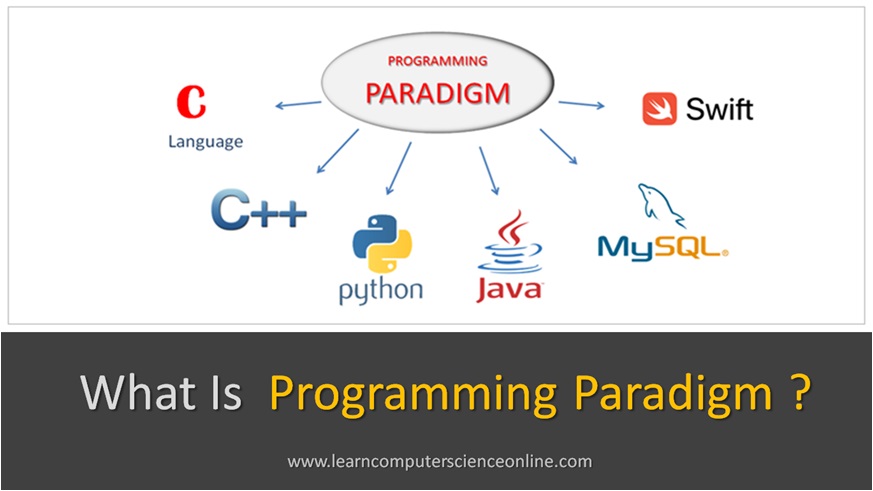 A programming language is essentially a problem solving tool. For each problem there can be many solutions. Further, each solution can adopt a different approach in providing solution to the problem.

For example , the C language follows procedural programming paradigm . Whereas the C++ , python and java are said to be object oriented programming ( OOP ) paradigm. 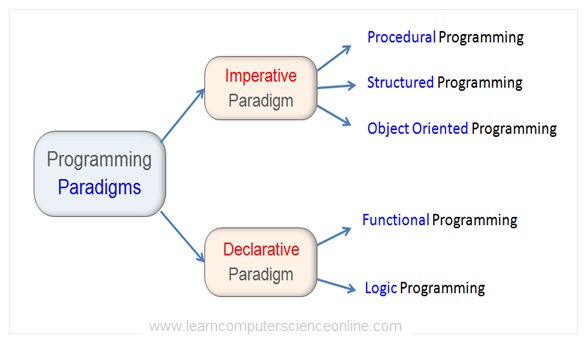 The computer programs essentially designed and developed to provide a solution to a specific problem . Different programming approaches have evolved over a period last few decades.

It is important for the students of computer science to be familiar with the concept of programming paradigm , different types and the respective languages.

In this tutorial , you will learn what is programming paradigm , different paradigm types and their features and its suitability for different software applications.

Let us start with a simple introduction to the concept of paradigm.

What Is Programming Paradigm ?

The word paradigm derives from Greek and Latin. It simply means pattern , model programming paradigm or a set of rules that defines a standard.

However , in the context of programming languages , the term paradigm means set of design principles that defines the program structure. 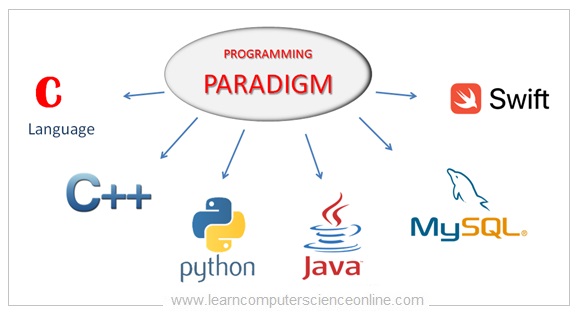 For example , Microsoft Office word has been developed to provide solution to the user for creating different types of documents. Similarly , there are software for airline ticket reservation , stock market analysis , hospital management and so on.

However , a problem can be solved in many different ways or approaches. A programmer can evaluate different approaches in order to select the best option.

And therefore , a computer program can be developed using different programming languages that belong to different paradigms. Each approach to the solution will have some merits and demerits. 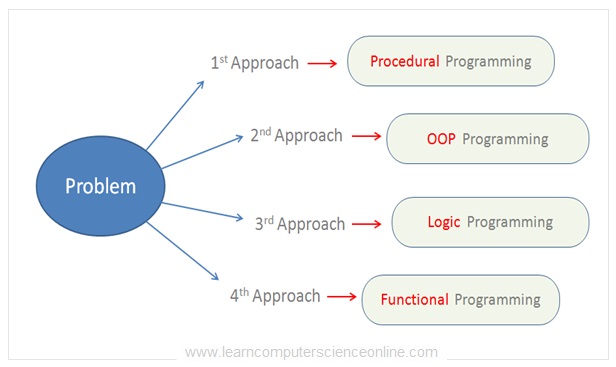 The programming paradigm is defined as a set of principles , ideas , design concepts and norms that defines the manner in which the program code is written and organized.

A  programming paradigm is a framework that defines how the programmer can conceptualize and model complex problem to be solved.

The programming paradigms can be classified into two main types. The paradigm type depends upon the programming language features and a particular style of organizing the program code.

The imperative style program consist of set of program statements. Each statement directs the computer to perform specific task. 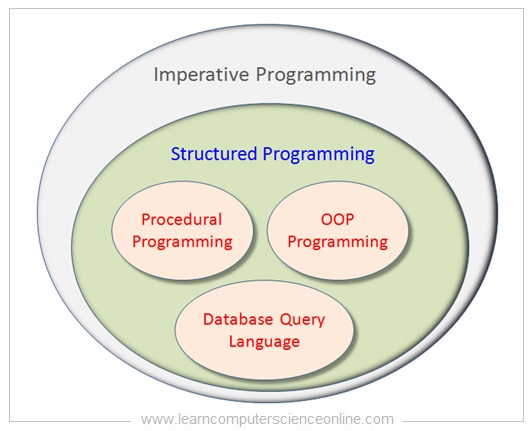 The main focus of the declarative style of programming is achieving the end result .This paradigm is straight forward and to the point while writing the program code.

Difference Between Imperative And Declarative Paradigm

The declarative approach to the programming is pretty much straight forward that leads to what is do be done.

On the contrary , the imperative style of programming consist of number of computational statements that focuses on how it is to be done.

Let us discuss one simple example that would highlight the fundamental difference in the programming approach for imperative and declarative paradigm.

In this example , let us imagine that you have to invite your friend to your house.  As per the declarative style , you simply give him your address and let your friend figure out how to reach your home.

As per the second imperative approach , instead of giving him simply address , you would rather write down number of statements. Each statement would guide him step by step to reach your place.

The structured programming intends to optimize the code by using the program control flow constructs , decision making ( If , If Then , Else ) constructs and the iteration constructs ( For , while loops ) , blocks and the functions. 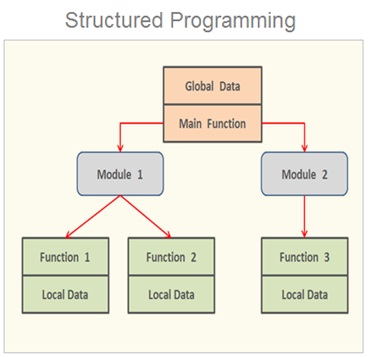 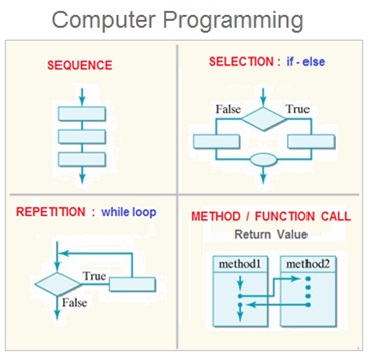 The structured programming approach does not advocate the use of unconditional control statements such as goto constructs. The use of goto constructs can result into a spaghetti code that is difficult to debug.

In modular ( structured ) programming , the program code is optimized for readability and re-usability by dividing the code into semi independent modules. These modules can be called number of times as may be required.

The structured programming approach can be of basically three types .

What Is Procedural Programming ?

The program based on procedural paradigm consist of set of procedures. The procedures are also referred as function , method or subroutines.

The program structure in procedural programming consist of set of functions. Each performs a specific operation.

The function consist of group of computational steps that directs the computer to perform specific operation. The function once defined can be called many time in the program to repeat the same operation. 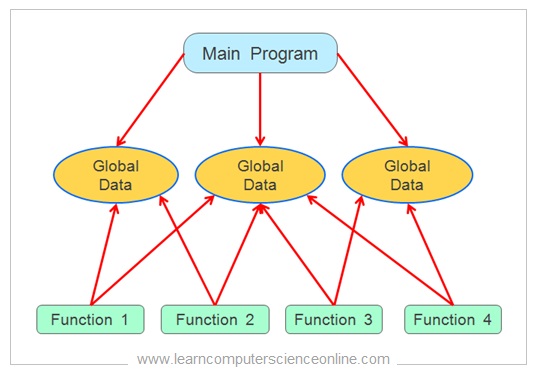 The programmer can either use standard library functions or create library of user defined functions.

The C programming language is the most commonly used and popular language that still used in the software industry.

What Is Procedural Programming ?

An object binds the data and associated methods together as single unit. As such the programmer can control the data access permissions by defining the access specifier. 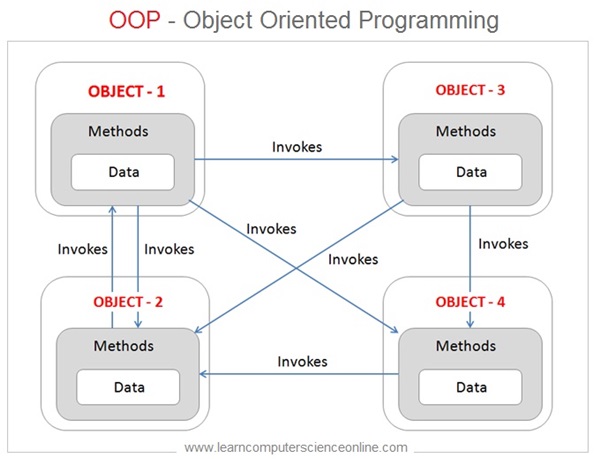 The OOP programming protects the program data from inadvertent operations by another methods. And therefore , the object oriented programming offers robust security features .

The OOP paradigm compliant languages such as C++ , Java and python are extensively used for enterprise level software projects.

The database query language such SQL ( Structured Query Language ) is the most commonly used example of model based language.

The database is vital component of most software projects. Most RDBMS ( Relational Database Management System ) support the SQL for database programming.

The database query language is also alternately referred to as model based programming.

What Is Functional Programming ?

In functional programming style the computer program is created with the application and composing the mathematical functions. 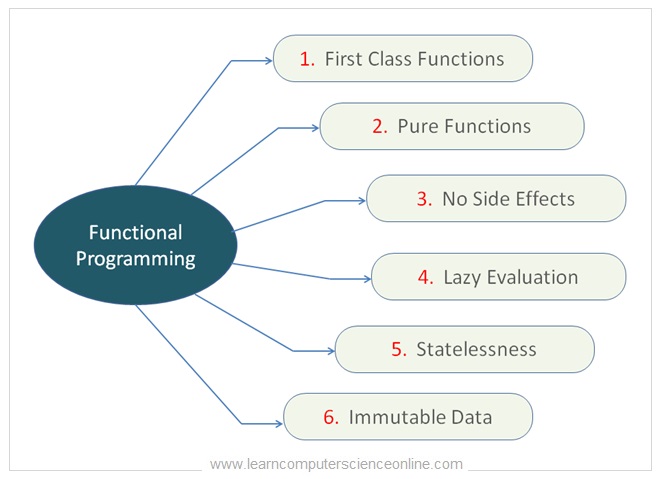 In functional programming , the program written in programming language will always produce output exactly similar to its equivalent mathematical function.

For example , let us consider one simple mathematical function.

The immutability is one of the most important feature of the functional programming.

For example if  you create a variable :

Var a = 100 ; The variable value will remain same for the life span of the variable. 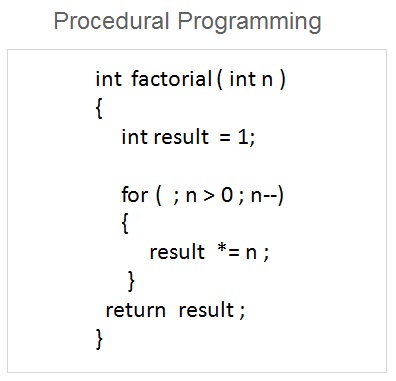 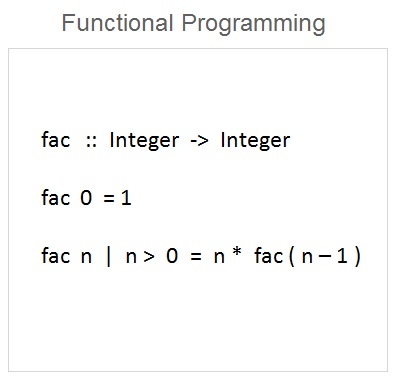 The biggest advantage of the functional programming is that these programs can easily run on the multi-core and multi-threaded environment.

What Is Logic Programming ?

The logic programming is a declarative programming paradigm that is based on the logic and the control . The term logic essentially means facts and rules . Whereas the control means an order of rules.

The main advantage of the logic programming is that the programmer needs to simply define the what part of the problem. And the system finds the best solution to that problem. 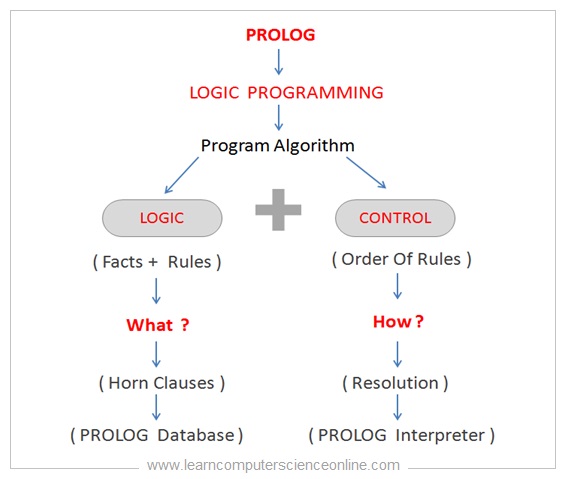 The program written in logic programming language consist of set of program statements in the logical form. Each statement is an expression of facts , rules and the order of rules.

The clauses are an important element of the logic programming. In other words , a logic program is a set of clauses .

The prolog is an example of declarative paradigm rule based logic programming language. The prolog program consist of set of program statements expressed in terms of facts , rules and the control.

What Is Programming Paradigm ?

What Is the difference between programming language and paradigm ?

The computer program is essential part of the computer architecture. The program code consists of set of instructions that directs the computer to perform various operations.

The computer programs are written using human readable high level programming languages such as C, C++ , Java, Python and others.

What is the definition of programming paradigm ?

In computer architecture , the programming paradigm is defined as a set of principles , ideas , design concepts and norms that defines the manner in which a program code is written and organized.

A  programming paradigm is a framework that defines how the programmer can conceptualize and model complex problem to be solved.

Which are the programming paradigms ?

Some of the most commonly used major programming paradigms include : 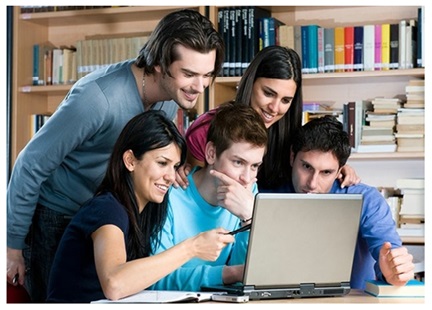 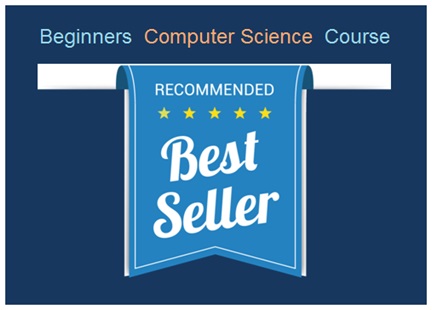 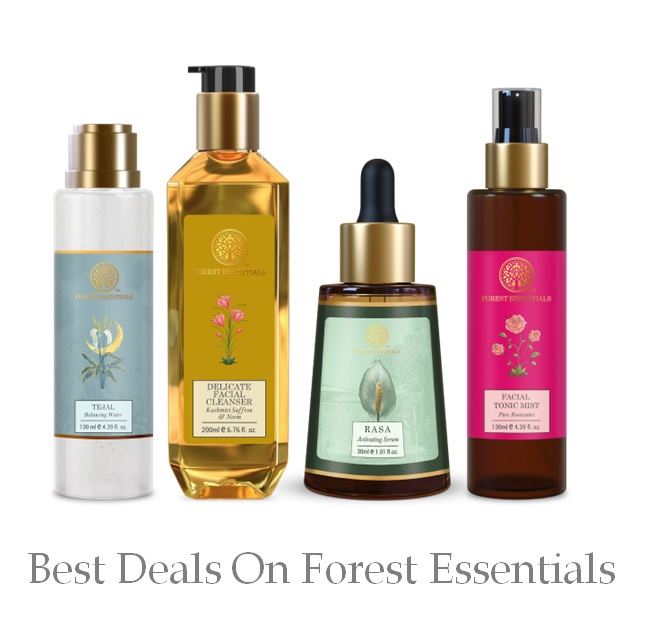 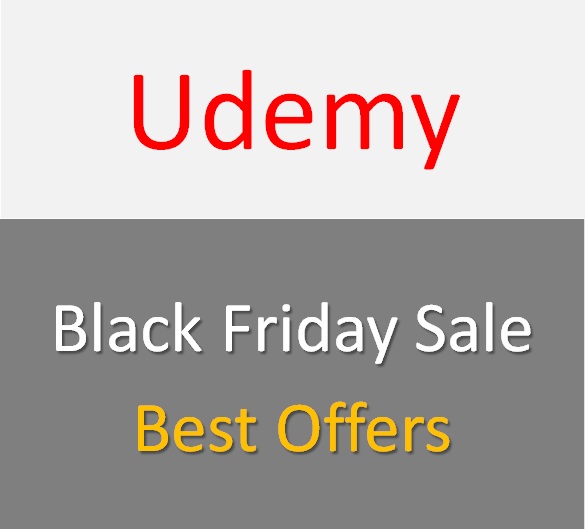